A significance test is conducted to test whether a new treatment has a significant effect on lowering blood pressure. The test yields a p-value of 0.02. This means assuming that the treatment has no effect, and for this fixed sample size, an effect as large as the observed effect would be seen in only 2% of studies. If the significance criterion (alpha) is set at 0.05, then this p-value of 0.02 leads us to reject the null hypothesis and establishes statistical significance.

Conversely, if the p-value region was NOT smaller than or contained within the alpha region (as shown in image 2 below), then the test would be declared ‘not significant’ and the null hypothesis would be retained. 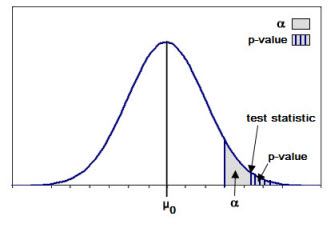 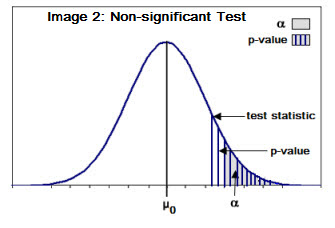 What is the p-Value from the StatSoft Online Textbook - http://www.statsoft.com/textbook/esc.html#What is "statistical significance" (p-level)